Check out Maria's blog for tips for dealing with anxiety :)

xMariaaa: Anxiety & Me: I've decided with a lot of thought about whether i should do a blog on anxiety and my personal experiences with it but again as an anxious...
at January 30, 2016 No comments:

(From pages 83-84 of the Big Book of Alcoholics Anonymous)

If we are painstaking about this phase of our development, we will be amazed before we are halfway through. We are going to know a new freedom and a new happiness. We will not regret the past nor wish to shut the door on it. We will comprehend the word serenity and we will know peace. No matter how far down the scale we have gone, we will see how our experience can benefit others. That feeling of uselessness and self-pity will disappear. We will lose interest in selfish things and gain interest in our fellows. Selfseeking will slip away. Our whole attitude and outlook on life will change. Fear of people and economic insecurity will leave us. We will intuitively know how to handle situations which used to baffle us. We will suddenly realize that God is doing for us what we could not do for ourselves. Are these extravagant promises? We think not. They are being fulfilled among us - sometimes quickly, sometimes slowly. They will always materialize if we work for them.

Reprinted from the book Alcoholics Anonymous (The Big Book) with permission of A.A. World Services, Inc
at January 26, 2016 No comments:

When God sends us trials 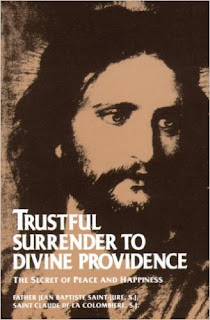 When God sends us trials If you would be convinced that in all He allows and in all that happens to you God has no other end in view but your real advantage and your eternal happiness, reflect a moment on all He has done for you; you are now suffering, but remember that the author of this suffering is He who chose to spend His life suffering to save you from everlasting suffering, whose angel is always at your side guarding your body and soul by His order, who sacrifices Himself daily on the altar to expiate your sins and appease His Father's anger, who comes lovingly to you in the Holy Eucharist and whose greatest pleasure is to be united to you. We must be very ungrateful to mistrust Him after He has shown such proofs of His love and to imagine that He can intend us harm. But, you will say, this blow is a cruel one, He strikes too hard. What have you to fear from a hand that was pierced and nailed to the cross for you? -- The path I have to tread is full of thorns. If there is no other to reach heaven by, do you prefer to perish forever rather than to suffer for a time? Is it not the same path He trod before you out of love for you? Is there a thorn in it that He has not reddened with His own blood? -- The chalice He offers you is a bitter one. But remember that it is your Redeemer who offers it. Loving you as He does, could He bring Himself to treat you so severely if the need were not urgent, the gain not worthwhile? Can we dare to refuse the chalice He has prepared for us Himself? Reflect well on this. It should be enough to make us accept and love whatever trials He intends we should suffer. Moreover it is the certain means of securing our happiness in this life quite apart from the next.

Pope: jealousy and envy are sins that kill with words

Pope: jealousy and envy are sins that kill with words
at January 21, 2016 No comments:

(Vatican Radio) Christians who stop at “it’s always been done that way” have hearts closed to the surprises of the Holy Spirit. They are idolaters and rebels will never arrive at the fullness of the truth. That was the message of Pope Francis at Mass on Monday morning at the chapel in the Casa Santa Marta.
In the first reading, Saul was rejected by God as King of Israel because he disobeyed, preferring to listen to the people rather than the will of God. The people, after a victory in battle, wanted to offer a sacrifice of the best animals to God, because, he said, “it’s always been done that way.” But God, this time, did not want that. The prophet Samuel rebuked Saul: “Does the Lord so delight in burnt offerings and sacrifices as in obedience to the command of the Lord?” Jesus teaches us the same thing in the Gospel, the Pope explained. When the doctors of the law criticized Him because His disciples did not fast “as had always been done,” Jesus responded with these examples from daily life: “No one sews a piece of unshrunken cloth on an old cloak. If he does, its fullness pulls away, the new from the old, and the tear gets worse. Likewise, no one pours new wine into old wineskins. Otherwise, the wine will burst the skins, and both the wine and the skins are ruined. Rather, new wine is poured into fresh wineskins.
Read more at link below:
Pope Francis: obstinate Christians are rebels and idolaters
at January 18, 2016 No comments:

“Happiness does not come to those who want to know all, or to possess all, or to enjoy all; rather it comes to those who set limitations upon the satisfaction of self. A man, for example cannot get the whole world into his hands, but he can wash himself of the world. Our powers of dispossession are greater than our powers of possession; there is a limit to what we can gain, but there is no limit to what we can renounce. In the end, the man who wants nothing is the man who has everything, for there is nothing that he desires. To deny self is to refuse indulgence to lower desires, to put a restraint upon ourselves, to act differently from the way the sensual in our nature would lead us. Self-denial is the test of love, whether it be human or divine. There may be pain in self-denial for a moment, but pain in the pursuit of the highest is certainly more joyful than ease in the neglect of duty. The agony in self-denial is momentary, but the joy that flows from it is lasting.” Archbishop Fulton Sheen (The Power of Love)
at January 08, 2016 No comments:

On the need for more Irish canonisations

Today is the feast of St Charles of Mount Argus, a Dutch Passionist priest who spent about 30 years of his life in Dublin, dying here in 1893 at the age of 71. He greatly loved by the people of Dublin, primarily because of his humility and simplicity. He was not a great preacher, but he was extremely gentle in the confessional. Like many of those who excel in the virtue of humility, he received many graces from God, including many graces within his own spiritual life as well as the grace of healing. Each day hundreds of people would flock to the monastery at Mount Argus to receive his blessing and those with means from far away would often send carriages to collect him and bring him to someone who was sick or dying. There were many reports of wonderful healings and these reports continue to this day, now that his power of intercession is even greater in Heaven. For an eye witness account of the life and virtues of St Charles click here.
There is no mention that I can find of St Charles in the writings of Fr Doyle, but it is certain that Fr Doyle would have been aware of him. Fr Doyle was 20 when St Charles died, and his reputation for holiness was alive and well, so Fr Doyle must have been aware of St Charles and his holy life.
Read more here
at January 05, 2016 No comments:

Mary and the Holy Spirit

Mary and the Holy Spirit By Father Francis J. Peffley

I wonder how many legionaries know that their founder, Servant of God Frank Duff, will probably be known as one of the two greatest Marian apostles of the twentieth century – the other being St. Maximilian Kolbe. Their writings and conferences on Our Lady are numerous, and both authors feature the proper and exalted place which Mary holds in the plan of redemption and salvation. As far as we know, these two never met, and yet their Marian teachings are almost identical. I believe one reason for this is that they were influenced by similar authors, especially by the works of St. Louis Marie de Montfort. Though their emphases of Our Lady’s role may vary, their basic doctrines do not differ on any major point. For example, most of Fr. Kolbe’s writings on the Blessed Virgin deal primarily with her Immaculate Conception, while those of Frank Duff emphasize Mary’s role in Redemption, her Mediation of Graces and her Spiritual Motherhood. But both authors hold that there cannot be a proper knowledge of Our Lady without an appreciation of her unique relationship to the Holy Spirit. For example, St. Maximilian said that Mary, the Immaculata, as he called her, is someone so sublime, so close to the Most Holy Trinity, that one of the Church Fathers did not hesitate to call her the Complement of the Most Holy Trinity, while Frank Duff has stated that Mary was exalted by God to the very “borders of Divinity.” They both attempt to define and explain Mary’s intimate union with the Third Divine Person and show a remarkable similarity in their theological thought. I am convinced that those who work and live for Mary will benefit from an introduction to the thought and devotion of these two servants of Mary, and I would like to share their vision of her with her legionaries.