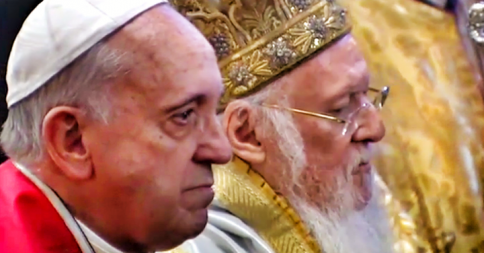 1. Ut unum sint! The call for Christian unity made by the Second Vatican Ecumenical Council with such impassioned commitment is finding an ever greater echo in the hearts of believers, especially as the Year 2000 approaches, a year which Christians will celebrate as a sacred Jubilee, the commemoration of the Incarnation of the Son of God, who became man in order to save humanity.
The courageous witness of so many martyrs of our century, including members of Churches and Ecclesial Communities not in full communion with the Catholic Church, gives new vigour to the Council's call and reminds us of our duty to listen to and put into practice its exhortation. These brothers and sisters of ours, united in the selfless offering of their lives for the Kingdom of God, are the most powerful proof that every factor of division can be transcended and overcome in the total gift of self for the sake of the Gospel.
Christ calls all his disciples to unity. My earnest desire is to renew this call today, to propose it once more with determination, repeating what I said at the Roman Colosseum on Good Friday 1994, at the end of the meditation on the Via Crucis prepared by my Venerable Brother Bartholomew, the Ecumenical Patriarch of Constantinople. There I stated that believers in Christ, united in following in the footsteps of the martyrs, cannot remain divided. If they wish truly and effectively to oppose the world's tendency to reduce to powerlessness the Mystery of Redemption, they must profess together the same truth about the Cross.1 The Cross! An anti-Christian outlook seeks to minimize the Cross, to empty it of its meaning, and to deny that in it man has the source of his new life. It claims that the Cross is unable to provide either vision or hope. Man, it says, is nothing but an earthly being, who must live as if God did not exist.
2. No one is unaware of the challenge which all this poses to believers. They cannot fail to meet this challenge. Indeed, how could they refuse to do everything possible, with God's help, to break down the walls of division and distrust, to overcome obstacles and prejudices which thwart the proclamation of the Gospel of salvation in the Cross of Jesus, the one Redeemer of man, of every individual? Source here
at November 30, 2014

After Before Tips to come!