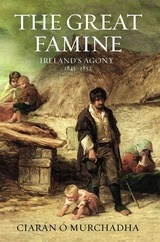 I'm reading: About The Great Famine

Over one million people died in the Great Famine, and more than one million more emigrated on the coffin ships to America and beyond. Drawing on contemporary eyewitness accounts and diaries, the book charts the arrival of the potato blight in 1845 and the total destruction of the harvests in 1846 which brought a sense of numbing shock to the populace. Far from meeting the relief needs of the poor, the Liberal public works programme was a first example of how relief policies would themselves lead to mortality. Workhouses were swamped with thousands who had subsisted on public works and soup kitchens earlier, and who now gathered in ragged crowds. Unable to cope, workhouse staff were forced to witness hundreds die where they lay, outside the walls. The next phase of degradation was the clearances, or exterminations in popular parlance which took place on a colossal scale. From late 1847 an exodus had begun. The Famine slowly came to an end from late 1849 but the longer term consequences were to reverberate through future decades.

After Before Tips to come!